correct lane discipline, correct signals on roundabouts.
The Peter Brotherhood roundabout may seem daunting at first sight but if you sit and look at this diagram it is logical. If you stick to simple rules you will be confident on this roundabout.

As with most descriptions, it is easier if I explain this in front of you than it is with words.

This roundabout is traffic light controlled which makes things easier but we still need to be aware of emergency vehicles and vehicles not obeying the rules for whatever reason.

By looking at the green car it is following the exact same logic.

This is the same for the yellow car.

Here is a clip entering the Brotherhood roundabout at night from the City Centre end of Bourges Boulevard heading North towards Werrington: 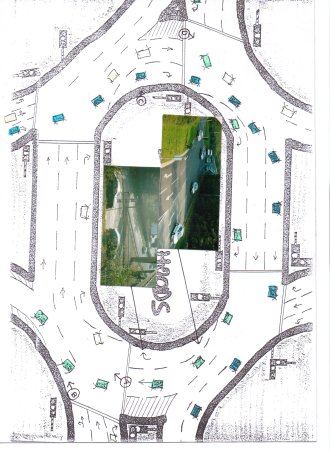 Logical procedures on the Peter Brotherhood roundabout
Next
Previous